I am always amazed in the year 2012 woman are still talking about strong female characters.  It’s funny that we’re always surprised when one comes along.  Even in Hollywood, actresses still can’t find the roles they can sink their teeth into.  As a reader, I look for characters that I can relate to in some way; a character who is more than a damsel in distress but less than an unfeeling, mean, witch.  I’m putting it gently, but I’m looking for someone, who when facing a problem, doesn’t necessarily need a man to bail her out, but a woman who can take care of herself in spite of her vulnerabilities.  Because in reality, women are multi-layered and complex.  We don’t fall into one end of an extreme.

When I was younger I read Danielle Steele, but I didn’t read her for long because even in my young girl opinion, I felt her female characters were far too needy and always put themselves in a position of needing to be saved.  I kept wondering why these characters always needed a man to improve their lives.  Why couldn’t they simply take care of themselves?  It seemed as though female characters were villains, or the witch, someone to be hated and despised, or weak and needed to be saved.  Why couldn’t I just find a real woman, who could simply be human and celebrate all that she was?

As I got older, I found myself drawn to shows like Buffy the Vampire Slayer.  I saw in her a strong character.  Yes she could kick ass, kill the vampires and fight the demons.  She also had a brain, could plan, and could save the world each week.  But she had a second side of herself, the side that liked clothes, shoes and boys, the side that was feminine, a little vulnerable; the side that sometimes needed to be saved.  She was a complex female character, real and human, a character who at times I could relate to.

The strong female character isn’t found in one extreme.  She’s not a total wimp like Snow White and she’s not a total monster like the evil queen.  She’s a combination somewhere in the middle.  She’s reactive, emotional, human, sexual, confident and sometimes, even unsure of herself.

Sun, I wrote her as a no nonsense person, strong and smart, the girl who could survive on her own.  But she didn’t feel genuine.  As the story unfolded and changed, I rewrote her, gave her friends and family in which to interact.  I gave her feelings, gave her stress.  I let the other characters take charge once in awhile, offer her support.  I melded two halves into one woman, a strong woman, who can take care of herself and ask for help when necessary.  We’re not perfect, so why should our characters be?  Why can’t we strive to have them simply authentic?
Charlize Theron commented on her new character in the movie Young Adult. She said, "Women are usually either really good prostitutes or really good mothers. Maybe women are finally getting the chance to play more honest characters," Theron said. "We usually don't get to play bad hookers or bad mothers -- or anything in between." 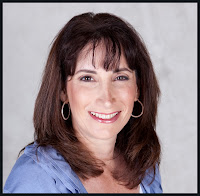 Author Bio:
Sheryl Steines is equal parts driven, passionate and inspired. With a degree in English from Wright State University, Sheryl dedicates time everyday to her art. Her love of books and a quality story drives her to share her talent with her readers as well as make the time to talk to book clubs and students about her process. Sheryl has eclectic tastes and enjoys character driven novels. In her own writing, the Annie Loves Cham series is driven by her love of the characters and her desire to place them in totally new situations. She enjoys testing their mettle. Behind the wheel of her ’66 Mustang Convertible, Sheryl is a constant surprise. Her sense of humor and relatable style make her books something everyone can enjoy. Sheryl can be found on Twitter, Facebook, or her blog. She also encourages her readers to email her and let her know what you think of Annie and Cham!
a Rafflecopter giveaway
Posted by Amanda at 10:28 AM