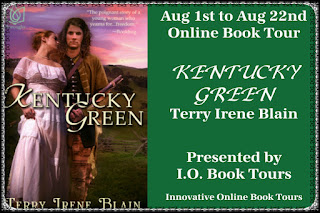 Book Description:
April Williamson’s heart calls her across the frontier, but only one man—a handsome army scout with a tormented past—can get her safely to freedom. Daniel McKenzie was an army scout—quiet, capable, handsome…and utterly unwilling to be the trail guide April Williamson needed to reach Kentucky. The Indian attack at Blue Licks was but one bitter taste of the American frontier, a massacre that had taken her father just as cholera had taken her mother. But April would not give up on her dream. At journey’s end was independence, and nothing would stand in her way. The young widow was beautiful and determined, but the months of travel involved in her plan would be too hard. Without the general’s order Dan would have told any woman no, but April especially. His secret would destroy her—or she might destroy him. April’s kiss was like the country itself. Restless and sweet, it promised a love that denied every boundary and looked only to freedom and the future.

My review:
Daniel McKenzie can handle racism, Indian attacks, and bitter enemies, but he's met his match in young April Williamson. April is determined to return to her family's land in the wilds of Kentucky, and Daniel is just as determined not to take her. In the midst of their growing romance is more danger than they anticipate. Not only do they have to travel through barely-charted territory, but Daniel has an enemy who won't give up until Daniel is defeated.

I loved reading about the early days of Kentucky settlements. We don't usually think of any land east of the Mississippi as being "wild", but it was all untouched by Europeans at one time.
About the book: Title: Kentucky Green

Author: Terry Irene Blain Publisher: Boroughs Publishing Group Release date: June 8, 2012 Pages: 208 Where I got the book: Free from the author in exchange for an honest review
Giveaway: 10 Ebooks (USA and international) a Rafflecopter giveaway
Posted by Amanda at 11:52 AM

Thanks for the giveaway! I love romantic books like this!

Sounds like an exciting, yet romantic book with interesting problems to resolve. Thanks for the opportunity to win the book.