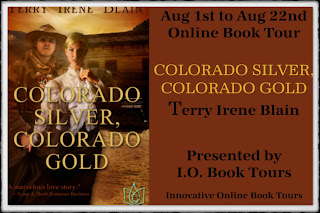 Socialite Juliette Lawson fled west from Philadelphia on a train and in disguise. In Colorado she’d be safe; she’d take work with her uncle at the Rio d'Oro, his smelting operation. Her actions back east had been wrong, but to protect her pregnant sister from scandal she would have done anything. Then she met a man as hungry for answers as she was for independence. A handsome, honorable man. For him, she wished the truth was hers to tell.


From the first, Wes Westmoreland knew he couldn’t trust her. Having grown up in the saloons and brothels of San Francisco, he saw trust, like love, as a luxury an undercover lawman couldn’t afford. Not on a job like this one, not with gold involved. This woman dressed as a widow was clearly hiding something; he’d felt it the moment they touched. But he’d felt other things too, stirrings in his heart, and for the first time ever, he saw riches worth the peril.

I always love to see a strong hero which just a touch of vulnerability. Wes

Westmoreland is strong and confident in his professional life, but because of the way he was raised, he doesn't believe he is good enough for a wealthy woman like Juliette. Watching the two dance around each other was just as interesting as wondering about what Juliette had hidden in the mysterious valise. I didn't want to put the book down. Wes and Juliette both have secrets and I couldn't wait to see what would happen when those secrets came out.

Author: Terry Irene Blain
Publisher: Boroughs Publishing Group
Release date: June 8, 2012
Pages: 225
Where I got the book: Free from the author in exchange for an honest review
Giveaway 10 E-books (USA and International) a Rafflecopter giveaway
Posted by Amanda at 11:12 AM

I love all kinds of books! Thanks.

Thanks for the giveaway!