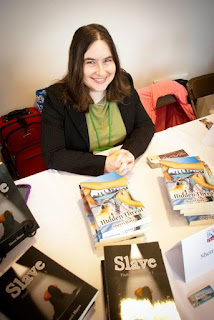 Sherri is the author of Hidden Threat, Behind Closed Doors (A Daniels Brothers’ Novel), and a short story, A Christmas Proposal. She lives in central Ohio with her husband and three cats. Her mother fostered her love for books by reading to Sherri when she was a child. Stories have been floating around in her head for as long as she can remember, but she didn’t start writing them down until five years ago. It has become a creative outlet that allows her to explore a wide range of emotions while having fun taking her characters through all the twists and turns she can create. When she’s not writing, she can usually be found helping her husband in his woodworking shop.

Tell us about yourself:
Coke or Pepsi?
I prefer Pepsi, but I’m not that picky about it.

If we looked under your bed, what would we find?
My house is pretty small, so I store things wherever I can. Under my bed there are suitcases, and some other odds and ins that don’t get used very often.

How are you like and unlike your main character?
There are parts of me in all my main characters. I can’t say I’m completely like, or unlike, any of them. If I had to pick one of my characters I’m most like, however, it would probably be Rebecca from Red Zone. There are parts of her history that I can relate to, as well as her desire to be in control of her life and her future. She’s also the oldest of two siblings, which I can relate to as well.

Did your book end up the way you intended?
No, but they never do. LOL. I don’t write from any type of an outline, so how my stories unfold is always a surprise to me. Even if I have a direction in mind when I start a book, my characters always have something else in mind. I’ve learned to just sit back and let them tell their story however they want to.

What is your favorite color? Why?
I love the color purple. No real reason other than that I think it’s pretty.
Purple is my favorite color, too. You don't need a reason; you obviously have impeccable tastes.

What is your favorite season? Why?
Summer. First, because I can’t stand the cold. I’m not a big fan of ultra-hot days either, but I’ll take those over the freezing cold any day. Second, because I love those evenings when you can feel rain in the air, and the wind is blowing. It has a mysterious and magical feeling I’ve always loved.

How long have your been writing? Was it a dream, a goal, or is it just a hobby?
I started writing when I was thirty. It wasn’t anything I’d ever considered before, and only did so then out of pure frustration. There is nothing worse than watching a television show you enjoy destroy a couple you love. I wanted to give them their HEA, so I wrote an alternative ending for them, and posted it on a fan site. By the time it was finished, the story was the eighth most read on the site, and I had some readers encouraging me to continue writing. About three years later, my publisher saw some of my online writing and as they say, the rest is history.

How many hours a day do you devote to writing? Do you have a set routine or do you write when the mood strikes?
I’m very much a mood writer, however, I usually set a word count goal for the day, and write until I achieve it no matter how many hours it takes.

Tell us about your book:
What is the name of it and is it part of a series or a stand-alone novel?
My latest book, Red Zone, is part of a series, however, it can be read as a stand-alone. The story centers around professional football player, Gage Daniels, and FBI agent, Rebecca Carson. http://www.youtube.com/watch?v=A9ofLjJsXRg

Where did the idea come from?
Red Zone is the second book in my Daniels Brothers series. I had to set up all four brothers in the first book, so I knew what I was getting into with Gage before I really even thought about his story. His lady, Rebecca, was a totally different story. All I knew is that I needed a strong woman to balance out Gage’s own strong personality. As I began to think more about that, and what he needed in a woman, Rebecca began to take shape.

I think the pitch says it best:
The only thing Rebecca Carson ever wanted was to join the FBI. Now her career is in danger because of a situation over which she'd had little control. Gage Daniels has made a pretty good life for himself. As a professional football player, he's used to getting almost everything he's ever wanted with just the snap of his fingers. This includes women. A well-timed smile is usually all it takes to attract the opposite sex, especially in Nashville. When a stalker threatens Gage, the team owner calls an old friend, Rebecca's ex-partner Travis Hansen, to help protect his star quarterback. Hansen offers Rebecca the job, something to keep her from going crazy in her apartment while she waits in limbo, and she jumps at the chance. Now Rebecca must work to protect Gage while staving off his advances. The last thing she wants is to be another notch on a hotshot athlete's belt.

Do you have any upcoming projects in the works or other books that have been published?

My current works include:

My next novel is due out July 25th.

Behind Closed Doors (The Daniels Brothers)

Some of the Amazon links above are affiliate links. I will receive a (small) commission from Amazon if you make a purchase using these links. Thank you for supporting this blog.
Posted by Amanda at 5:47 PM